The past week’s “Essential 100” scripture reading carried me through the life of Joseph.

The child of Jacob’s older age and the only child of his beloved wife Rachel, Joseph was treated with special preference.  We see how this created jealously and anger in his older brothers and they sold him into slavery in Egypt, allowing their father to believe that he was dead.

In Egypt Joseph became the slave of Potiphar, the captain of the guard, and he excelled so greatly in management that he was given complete reign of his mater’s home.  When his master’s wife became incensed that Joseph would not sleep with her, she falsely accused him of taking advantage of her and so Potiphar had Joseph put in prison.  Yet even there, God blessed everything that Joseph undertook and he became manager of the prisoners.

God gave Joseph the interpretation of dreams so that after several years in prison, he was summoned by the Pharoah to interpret his dream.  After Joseph gave the interpretation and gave God the credit, Pharoah made Joseph the head of Egypt, second only to himself.  He was given position, wealth and a wife who bore him two sons.

When famine came, and Joseph had prepared Egypt to deal with it, his brothers came to buy food and he was eventually reconciled to them, and his father, and took care of them all.

There were several things that stood out to me in the account of Joseph’s life: 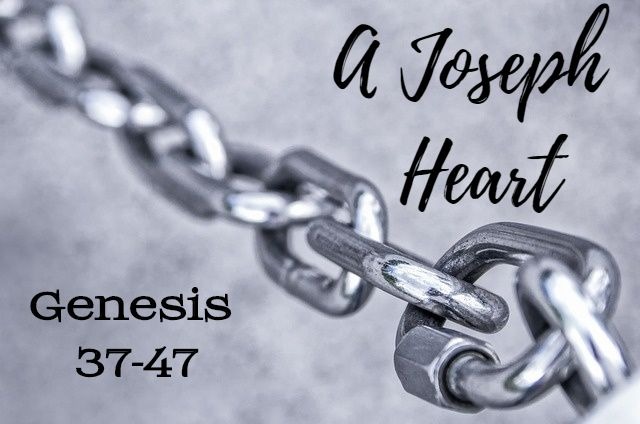 I think I love Joseph’s story more than ever.  Reading it this time, it stirred in me a desire to pursue (in this case) a Joseph heart…

If only I can remember not to gripe.  Instead let me seek honor, and strive to do my best even when the job is lowly and I’m moving slowly!!

God give me the grace to remember that He is working in every circumstance.  That my brokenness isn’t beyond being used by Him.  That even when I find myself in desperate situations, God never wastes pain.

Let me never forget that it’s not about me… it’s all about God’s plans, and God is all about redemption and reconciliation.  So let forgiveness be my default.  Let concern for others overtake any selfish tendencies.  Let me be content with honoring God, and let God do whatever He wants with the rest.

One thought on “A Joseph Heart”