To Use the Index of the Other Posts in this series, please scroll to the bottom of the page.

Why We Need to Abide

Jesus explains the importance of Abiding in John chapter 15:4,5.  “Abide in me, and I in you.  As the branch cannot bear fruit of itself unless it abides in the vine, so neither can you unless you abide in me.  I am the vine, you are the branches; he who abides in Me and I in him, he bears much fruit, for apart from me you can do nothing.”

Jesus has just washed his disciples’ feet.  They have observed Passover together in the upper room, and Judas has gone on his errand of betrayal.  Jesus has been telling them that He is going to be leaving to go to His Father. Can you imagine that they may have felt frightened and confused?   Jesus comforts them, telling them that He will not leave them as orphans.  He is sending them a Helper, the Holy Spirit, and they can continue to have fellowship with Him, and so can we, if we abide in Him.

When we are saved into a relationship with Jesus, the secret to living a fruitful life is Abiding.

Abiding: What is it?

I am assuming that if you are still reading, that you have some idea about the choices we can make to continue growing in that relationship: spending time reading God’s Word in order to learn more about His heart and what He wants for us, talking to Him in prayer, taking time to listen for His voice in our lives, and obeying Him.

The Greek word for abide, in its various forms, means to remain; it’s where you put down roots and make your home; it’s to be held, continually; it endures; remains as one and doesn’t leave; abide tarries for… it waits.  Does your heart wait upon the Lord?

There’s a difference between going through the motions of reading, praying and obeying because it’s the right thing to do and getting up in the morning with anticipation, looking forward to spending time with Him and seeing what the Lord has for you today.

I can’t tell you what truly abiding should look like for you because everyone has to come to that place of audacious love in their own way.  I think the secret lies in recognizing the magnitude of what Christ has done for you.  The cry of my heart this past year has been, “Jesus, help me love you more!”  I want to be like the woman in Luke 7 who annointed Jesus with sweet smelling oil and washed His feet with her tears.  When the Pharisee who owned the house where they were meeting criticized her, Jesus told him that it was obvious that her many sins were forgiven because of the great love she showed him. “He who is forgiven little, loves little.” (verse 47)

Don’t let the joy of your salvation diminish as time passes.  Keep your awe over what Christ has done for you.  Pour your time and effort into this relationship you have with God, and watch how He pours more into you than what you have given.  The more you give to Him, the more fruit you will see in your life.

Love, joy, peace, patience, kindness, goodness, faithfulness, gentleness and self-control… these will be rich hallmarks of your character and will saturate your interactions with others.

“I am the true vine, and My Father is the vinedresser.  Every branch in Me that does not bear fruit, He takes away;” (verses 1,2a)

Several years ago I watched a video series by Focus on the Family which featured Ray Vander Laan.  It was a tour of the Holy Lands, and in one tour he elaborated on these verses in John 15.  He explained that grape vines were planted where they flourished best: in harsh soil.  He also explained that the translations we read are not the best explanation of what the original language meant to imply.

The vine is established and the branches are cultivated by the vine dresser, the gardener, for one purpose only–to bear fruit.  “Every branch in Me that does not bear fruit, he takes away;” (vs 2)  It’s a common teaching that this is referring to “dead wood” or those who are not living Christ-like lives because they were never really saved.  We often read this and think it means that they will be removed and carried away.  Only this verse says, “Every branch in Me,”  If we are saved we are in Christ, and if we are in Christ as this verse says, we know that the will of God is that Jesus will never lose those who the Father has given Him (John 6:39).  They are not removed.

The more accurate translation would say that He will lift them up.  If the plants are allowed to lay on the ground they can become too moist and dirty and can mildew.  If they become sick, they do not produce.  The vine dressers in the old country lifted the vines up by placing large stones at the base of the plant.  The branches have to be washed and tied up–lifted up– so that they can begin bearing.  Notice what the next verse says,

“You are already clean because of the word I have spoken to you.”

When we put our trust in Jesus as our Savior, our sin is forgiven. We are in Christ and belong to Him, but we are human and we still sin, even when we don’t want to.  Paul put it like this:  “For what I am doing, I do not understand; for I am not practicing what I would like to do, but I am doing the very thing I hate.” Romans 7:15

The sin that persists in our lives is like the dirt and mildew on the branches… God must lift us up and clean us so that “we may share in His holiness.” Hebrews 12:10  This looks like discipline.   “All discipline for the moment seems not to be joyful, but sorrowful; yet to those who have been trained by it, afterwards it yields the peaceful fruit of righteousness.”( verse 11)  It is in our best interest to cooperate with his discipline.  The results are worth it!

And what about the branches that are already producing fruit?

When we bought our house it had an old apple tree in the front yard.  A very large aspen tree had grown up behind it, shading it, and so the branches of the fruit tree had grown up and over, all to one side.  My husband took out the aspen tree last spring to allow light to get to the tree, but, unfortunately a good pruning wasn’t on the docket until fall.  I have never seen a tree with so many blossoms, and the bees did their job!  Oh, the apples that grew!  Many dropped off when they were still tiny because the tree simply could not sustain so much, but what continued to grow had us so excited.  Fall could not come soon enough! 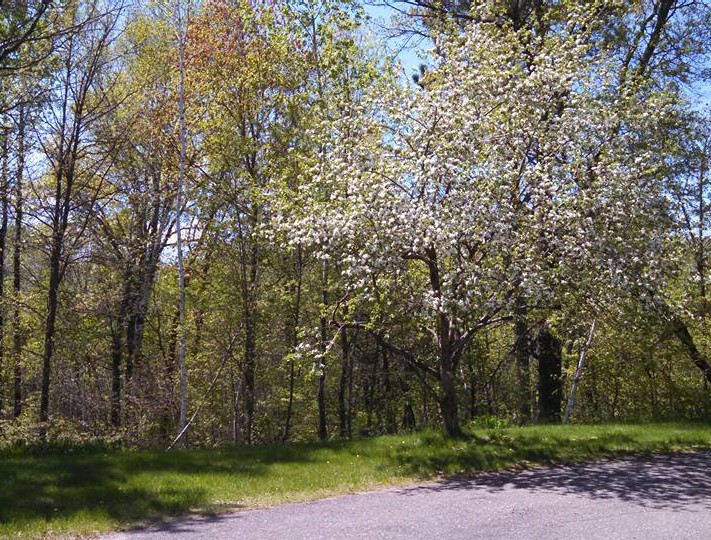 Then a wind storm came.  Need I say more?  Those big branches that were growing the wrong direction?  Snap.  They were still hanging, but not by much.  We propped them up and prayed for them a lot.  The apples on those branches never reached their full potential.  They were smaller than the fruit on the other branches, and did not ripen completely, so they were more sour and not sweet.  They were good for sauce, but not much else.

Sisters, we don’t want to be like those broken branches.  We want to be pruned so that we grow straight and strong.  We want light to get where it needs to go and put our energy into the things that are worthy of our calling.

Grape vines are heavily pruned, much more than apple trees.  My understanding is that the vine dresser cuts them back so far that they can look quite pitiful, but the more that is cut away, the bigger, sweeter, and more plentiful the harvest.  This is what we want. This is what identifies us as belonging to Him.

I have gone through seasons of pruning.  It’s not pleasant.  God cut away relationships. He cut away pride.  He hacked away at my sin of worry–one by one, as the circumstances I had always feared came to pass and as I was forced to let go of self, I learned I would live and, I learned to lean into Him more. After awhile, like Job, sometimes God will restore what He has removed from our hands, but He reminds us to remain in His love. When the season of pruning has ended, don’t go back.  Don’t forget.

Jesus said that he shared these things so that “My joy may be in you, and that your joy may be made full.” (verse 11)

Our piano teacher is going to be 95 this month.  She is the most wonderful lady.  She saw me reading one day and asked me what I was learning.  I told her I was studying John 15 and pruning and she sat down across from me, smiling, and said, “Well now, that’s the thing,” her eyes twinkled, “I’m not the person I used to be.”

Isn’t that the glorious thing?  I’m not the person I used to be, and I am so very thankful!

But by the grace of God I am what I am, and his grace to me was not without effect. No, I worked harder than all of them–yet not I, but the grace of God that was with me.”   1 Corinthians 15:10

You can find the other devotionals in this series on the Fruit of the Spirit on  THIS PAGE.

This devotional was written to use in conjunction with  A Woman’s Walk with God, Growing in the Fruit of the Spirit by Elizabeth George.

Thanks to Pixabay for the photos of the grape vines.

4 thoughts on “Abiding in Christ, the Secret to a Fruitful Life”