Our newest addition decided to make her arrival early.  Actually, she almost made my birthday… almost.

After having a few babies, I’ve come to expect a few things with labor and delivery.

Many weeks of Braxton Hicks and 5-7 hours of hard labor on ‘the’ day is what has been typical.  I’ve been accused of having babies that “crawl” out.  We all have different kinds of bodies with different experiences, but for all of us it is hard work.  After all, God declared that women would give birth with pain.  With this baby, however, the pattern for labor was changed, and I am grateful for the ease with which she was born.

The pregnancy was not easy.  You all remember I shared how we spent months praying for the placenta to move up out of the way of the birth canal so we could have a natural birth.  God answered!!

I felt well after the 4th month, but the veins in my legs have gotten worse with each baby, and especially with the girls because I have carried them lower than the boys.  I had hoped that being in better shape and at a lower weight would help, but sadly it didn’t.  At ten weeks I began having problems and had to go back to wearing maternity support hose.  They don’t stay up well.  If I’m on my feet I have to pull them up constantly.  I couldn’t be as active as I wanted to be, but I’m very thankful that it was summer through the worst of it and I didn’t HAVE to do as much as during the school year.  It’s the little graces that add up, you know??  Evidence of a great BIG God.

Half-way through September, these hose that were on their second pregnancy just wore out.  There were holes in the thighs, holes in the toes, and then the hole in the heel…. and that was it.  Both pair wore beyond rescue the next to last weekend in September.  I wasn’t quite sure what to do about it. 3 weeks left and the shipping for the hose company in S.L.O.W.

Sunday the 23rd I woke and was SO uncomfortable.  There was a lot of pressure with the weather, and I had no idea we were going into a full moon.   I spent all afternoon after church doing the things I knew needed accomplished to be ready for the birth.

“Nesting,” my family whispered.  Why do I not like that term?  Maybe because I don’t like being stereotypical.

“I’m just getting ready so I don’t have to think about it anymore,” I’d tell them.  The next day was my birthday and I wanted to complete my list so I could just relax and enjoy.

“No!” I’d exclaim, “I do NOT want to labor on my birthday!” Someone had ideas of her own though.

All day Monday the 24th,  I was aware that the “One or two productive contractions” a day that I’d been having for the last couple weeks had turned into a couple an hour. This is not my normal pattern, but it was nice.

I laid low the first half of the day and then decided to just go for it and let hubby take me out to lunch as planned.  🙂  We ate at the Chinese Buffet (yummy!!) and then went grocery shopping so I’d have what we needed for the week.  My menu plan was set and my girls are all good cooks.

I called the midwife around 7 and told her to expect another call “soon”.

After our family dinner that evening, we bought “I Can Only Imagine” on digital format from Amazon.  I’ve been waiting many months to see this movie!!  I thoroughly enjoyed it!  It was a late night, but so good to just “be” with family.  Because we worked ahead on school, I wasn’t worried about the next day’s schedule.  We told the kids that baby would probably come sometime in the night, and they headed off to bed.  This is where it got fun…

I called the midwife back about 10:30.  “If you leave now and I don’t get into the tub until midnight, maybe you’ll get here in time?” I told her.  She had a two and a half hour drive, and I knew one thing absolutely for certain: once in the tub, there would be no more dilly dallying.  Baby would come fast.  I just didn’t know how fast, but I wouldn’t have hot water until midnight anyway.  Our hot water is on off-peak and the tank is too small for our large family.  An inordinate number of people decided to take showers that morning, and so we’d been cooking water on the stove just to get the dishes done.  No, there would be no hot water until 12.

Instead of leaving then, she told me to get some rest and call her when things sped up.  Hmmm… not sure what would happen if I just tried to sleep?  My babies almost always come in the night.  Those ladies who have a baby with the entire family and in-laws in the room?  Bless their hearts.  That’s not me.  Give me dim light.  Give me quiet.  And leave me alone.  😉

I tried it.  I went to bed around 11:30, but no matter how hard I tried to sleep, I was awakened every 12 minutes on the dot.  Far apart right?  But long contractions, and after an hour I couldn’t do it anymore.  I was breaking into a sweat with each one, and I felt like I was going to lose my dinner.  I wondered, “Is it possible that I could be in transition?”  No hours of hard labor?

I called the midwife at 12:38 and told her I had to get in the tub.  She didn’t think anything of the space between the contractions, but when I told her they were making me sick, her “Oh,” and silence is something I’ll never forget.  Yep, she was not going to make it to catch this baby.

If you’ve never labored in water, let me tell you, it cuts the pain in half.  We use Bradley Method for our births.  Instead of the huffing that they do with Lamaze, which causes tension and worsens the pain (and can hyperventilate the mother and baby), Bradley Method focuses on deep breathing and relaxation which lessons the pain and makes contractions more productive.  I’ve used this technique with 9 babies and I wouldn’t do it any other way!

Mercy.  God’s mercy had carried us this far, and I asked that God would grant mercy in the delivery as well.  It was late and I was tired.  I knew hubby would prefer the mid-wife to be there.

As soon as I got in the water, my contractions moved from 12 minutes apart to 3-4 minutes apart, and they were 2 minutes in duration.  After two rounds of that, I started calling for hubby to wake up and get up.  He can be difficult to wake, and I needed to know he was ready.

I had ordered a birth kit through Amazon so that I would have a cord clamp “just in case.”  Hubby busied himself for a couple more rounds of contractions, getting the fresh towels, and readying the sterilized scissors and clamp to cut baby’s cord.  I had been feeling “pushy” through all this, and I felt the water break.  Immediately, baby’s head moved down.  We began to slowly drain the tub water.

After the first baby, my mid-wife instructed me not to push with my contractions.  She knew that if I did, babies would come too fast, and she assured me my body could push on its own.  I’m grateful for her orders.  I try to resist helping my body push and I’ve never needed a stitch.  This time baby’s head emerged with one contraction and hubby could see that the cord was wrapped around her neck so I helped him slide the rest of her out.  The “work” had been spread out through the day, and the delivery so fast, I could hardly believe it.

The cord was short, and it was wrapped around her neck, waist and leg.  We worked together to untangle her from the top down, rotating her body as he pulled the cord away from her.  She was so tiny!  Our smallest baby so far, weighing just 6 pounds and 6 ounces.  Her coloring was good and she was quiet, but breathing.  I never felt panic, as I know I would have with other deliveries.  I had been praying for her throughout the pregnancy, and fervently the whole time I had been in the tub, and now as we untangled her little leg and I laid her on my belly, I gave thanks for God’s precious blessing and for His peace, massaging her body and encouraging her to cry.

She covered her eyes with one hand and tried to suck her other hand.  The cord was too short to nurse her.  She had a small blister on one wrist where she had been sucking on it in the womb.  Yes, she wants to be a thumb sucker!

Early babies are COVERED with the white, creamy vernix, which protects their skin.  She was no exception.  Oh, her bladder worked.   🙂  We used a bulb syringe to clean amniotic fluid from her nose.

When the cord stopped pulsing, we put on the sterile clamp and cut the cord.  Hubby wrapped her in a clean towel and took her to meet her big sisters.  They had not been able to go to sleep, and ran out of their rooms as soon as they heard baby noises on the stairs.

The other reason I love birthing in the tub?  (besides the fact that it eliminates half the supplies needed ?)  As soon as I’m able to deliver the placenta, I can just stand up, wash off, and a clean me can go get into my clean bed and nurse baby.  🙂 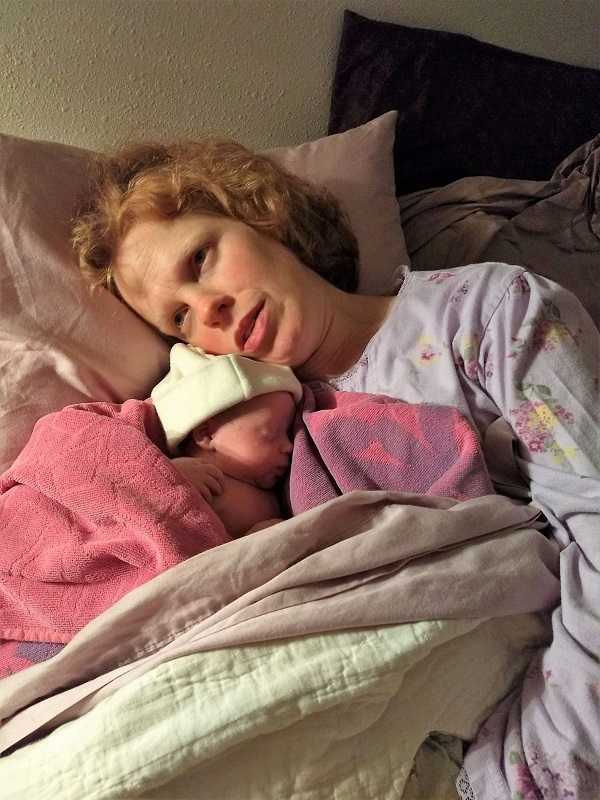 Melody was born at 1:05 am on September 25th, just 20 minutes after I slipped into the tub.  She got her own birthday.  🙂 Our mid-wife arrived sometime after 3.  She did the check-up and the informal birth certificate with little stamped feet. (She would return in a day for a check up and complete the formal paperwork at that time.)  Everyone was doing well, and very, very tired!

It was so good to finally get to sleep.  And it was so much fun when the littles awoke in the morning and found their sister waiting to meet them.  🙂  “Baby’s here!” Charis announced.  There has been lots of holding and singing and rocking and praising.

I somehow don’t have a picture of my second born, Rebecca, holding Melody.  I assume she must have been behind the camera as she loves taking pictures.

Charis is sitting on big sister’s lap to hold Melody.

Those big girls had hardly been able to contain themselves in the last weeks, they were so looking forward to meeting baby.  They’ve taken care of so many littles that, when Melody was born, it was honestly an entire day before I even changed a tiny diaper.  They just knew what to do and enjoyed doing it.  They cooked meals, washed clothes, and pampered me by bringing me everything I needed and allowed me much rest in the first few days.

We were back to school the next week, and adjusting to a little different schedule.  I don’t need those old holey support hose anymore!  So MANY reasons to be thankful.

A tremendous thank you to all of you who have faithfully prayed us through the past few months.  We are grateful to God, and grateful for you!

9 thoughts on “Our Home Birth Story with baby Melody”